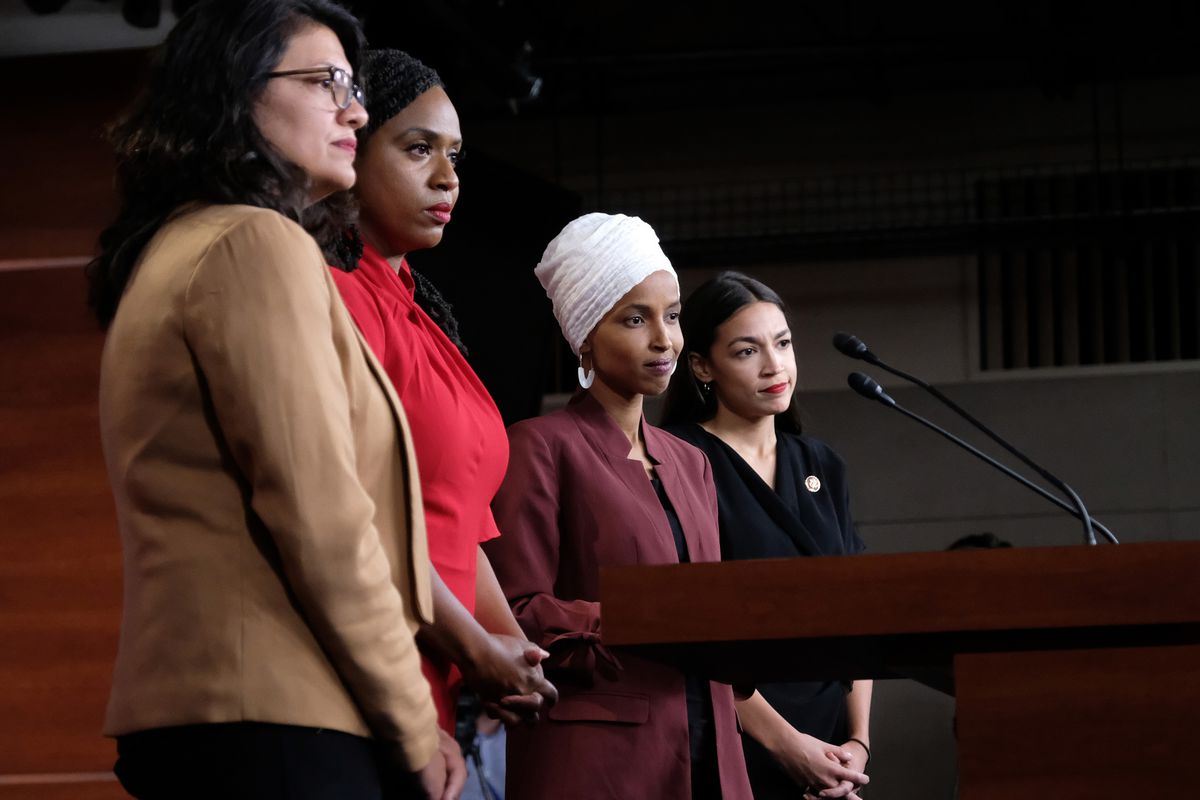 On 14th July 2019, US President, Donald Trump, communicated the following message in a sequence of three tweets regarding the attitudes and views of elected Democratic Congresswomen Ilhan Omar, Alexandria Ocasio-Cortez, Ayanna Pressley and Rashida Tlaib.

“So interesting to see “Progressive” Democrat Congresswomen, who originally came from countries whose governments are a complete and total catastrophe, the worst, most corrupt and inept anywhere in the world (if they even have a functioning government at all), now loudly and viciously telling the people of the United States, the greatest and most powerful Nation on earth, how our government is to be run. Why don’t they go back and help fix the totally broken and crime infested places from which they came. Then come back and show us how it is done. These places need your help badly, you can’t leave fast enough. I’m sure that Nancy Pelosi would be very happy to quickly work out free travel arrangements!”

Omar arrived in the US as an eight year old refugee from war torn Somalia, being naturalised as a US citizen as a child.  Ocasio-Cortez, Pressley and Tlaib were born in the US.

If there was any lingering doubt that the current occupant of the White House is a white supremacist and racist this statement alone should dispel such illusions.  Omar has responded by saying,

“We have condemned this president’s racist remarks.  I believe he is a fascist.”

Vermont Senator, Bernie Sanders, has accused the president of “stoking the most despicable and disturbing currents in our society” while 2020 Democratic candidate Elizabeth Warren stated,

“He is trying to divide and distract us from his own crimes and from his deeply unpopular agenda of letting the wealthy and well-connected rip off the country.  We must do more.”

Trump’s campaign for the 2020 presidential election is underway.  At a rally in North Carolina this week mention of Omar prompted Trump supporters to break into an eruption of “send her back” chants.  Trump claims to have tried to stop this but the evidence suggests otherwise.

The racist tweet was aimed at all four Congresswomen but the demonisation of Omar is exacerbated by her Muslim faith, adding more than a hint of Islamophobia to Trump’s remarks, a toxic mix which will not be lost on his electoral base.

The basis for the 2020 election was spelled out even further in a sequence of tweets on 15th July when Trump proclaimed,

“We will never be a Socialist or Communist Country. IF YOU ARE NOT HAPPY HERE, YOU CAN LEAVE! It is your choice, and your choice alone. This is about love for America. Certain people HATE our Country. They are anti-Israel, pro Al-Qaeda, and comment on the 9/11 attack, “some people did something.” Radical Left Democrats want Open Borders, which means drugs, crime, human trafficking, and much more. Detention facilities are not Concentration Camps! America has never been stronger than it is now – rebuilt Military, highest Stock Market EVER, lowest unemployment and more people working than ever before. Keep America Great!”

Trump appears to have added a new ally to his roster in the form of US Congressman, Lindsey Graham, from South Carolina, who has enthusiastically endorsed Trump’s position and stepped up the abuse against the four congresswomen.

The Communist Party USA (CPUSA) has condemned the recent spate of attacks stating,

“Trump sank to new lows accusing four women members of Congress of “hating America” demanding they “go back to where they came from.”  Lindsey Graham added injury to insult by labelling them “a bunch of communists” and by implication suggesting they were advocating “foreign ideas.”

But socialism and communism are as American as apple pie.  Let’s recall that before the arrival of the Mayflower, the original Native American inhabitants held land in what is now the U.S. in common: it was capitalism that was brought in from outside.  And throughout U.S. history socialists and communists made many signal contributions to public life from serving as Generals in the Union Army fighting against slavery, to drafting Social Security legislation, to adding enormously to American arts, letters, and science.”

Not that Trump or his electoral base care about any of that.  The politics of Trump thrives on the need for a public enemy, or enemies, against which he can defend the US, its interests and its so called ‘greatness’.  The four Congresswomen are the domestic manifestation of this approach.  US sabre rattling in the Persian Gulf, stepping up its threat of military action against Iran, is the international dimension.

Reducing politics to the good guys and bad guys, white hats and black hats, cowboys and Indians is, ironically, the Trump method.  It worked in 2016 because the Democrats fielded an establishment candidate incapable of hitting back with enough power to dent the Trump base.

It will be a tall order to dislodge Trump in 2020 but the Democrats urgently need to find a candidate to make inroads, otherwise another four years will see an even more dangerous world for progressives both inside and outside of the United States.