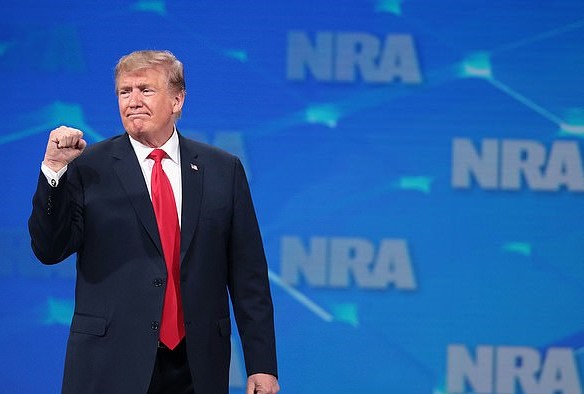 Trump – promising the NRA he will oppose gun control

The right wing press are in a spin about Jeremy Corbyn calling out US President, Donald Trump, as a misogynist, racist, climate change denier and refusing to have anything to do with the state visit scheduled for the 3rd – 6th June.

The Daily Mail, not surprisingly, were almost gleeful in their denunciation of Corbyn stating,

“Jeremy Corbyn was accused of ‘staggering’ hypocrisy last night after snubbing the Queen’s invitation to a state banquet with Donald Trump.

Despite his record of meeting terrorists and extremists, the Labour leader yesterday said he would refuse to attend the dinner with Mr Trump at Buckingham Palace in June.”

The Daily Mail were incensed by a tweet from Corbyn which made his position categorically clear stating that,

“Theresa May should not be rolling out the red carpet for a state visit to honour a President who rips up vital international treaties, backs climate change denial and uses racist and misogynist rhetoric.”

What is not to agree with?  State visits from US Presidents are not the norm.  If anything, the honour accorded to Trump is only the third state visit by a US President in the 67-year reign of the present Queen, making it more the exception rather than the rule.

The bluster about Corbyn snubbing the Queen and the hot air from failed Tory leader Ian Duncan Smith that this demonstrates that Corbyn is “unfit to be Prime Minister” is just a smokescreen.  The idea that the Queen is above politics and that a state visit somehow exempts a visiting leader from the normal rules of politics is nonsense.

The monarch, as the UK Head of State, is the embodiment of the ruling class and symbol of everything that is outdated, undemocratic and anachronistic about the British state.  Corbyn should have no qualms about snubbing either the US President or the British monarch for perfectly sound political reasons.

It may be expected that liberal bastion, The Guardian, would take a different line but if senior correspondent Simon Jenkins is to be believed, that is not the case.  For Jenkins it is merely a matter of courtesy, stating,

“A US President has been invited to Britain on a state visit.  It is a state courtesy, between one democracy and another, on the occasion of a wartime anniversary.  No conceivable purpose is served by 200,000 people coming to London to shout insults at him.”

Jenkins argues that simply opposing policies or a particular politician does not win political arguments and that however much anger Trump generates that is “no reason for childish protests”.  Oozing condescension Jenkins argues that there is no room for direct action in the pantheon of methods in which messages can be delivered.  Trump may well shrug his shoulders if a quarter of a million people turn out to oppose his visit but there is no evidence to suggest that he is open to rational debate either.

Sometimes the loud, noisy, visibility of hundreds of thousands of people on the streets is the only way to get a message across, not only to President Trump but to the millions who will watch elements of the visit on TV and social media.  Is our only response really to concur with Jenkins that we extend Trump every courtesy?  In the concluding words of his article, Jenkins suggests that we bow down to the climate change denying racist saying,

“You are welcome, Mr. President.”

That is simply not good enough.  Trump does not and will not play by the rules, even the distorted rules that pass for political discourse in the United States.

There is no reason on Earth to welcome Donald Trump to the UK or anywhere else, President or not.  There is every reason to oppose the policies and practice of the leader of the most powerful nation on Earth, especially when that leader embodies the very worst aspects of that society and would willingly impose those ‘values’ on others.

The debate will rumble on until Trump’s visit and beyond.  Taking a principled stand will be another stick used by the right wing media to beat Jeremy Corbyn.  However, Corbyn has given a clear lead on this issue and opposition to Trump’s visit must be vocal and it must be loud!