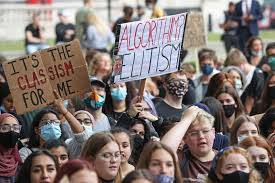 The failings of the Boris Johnson government become more evident daily, as one debacle follows another and control remains just out of reach at every turn.  The handling of the COVID-19 pandemic has been a calamity at every level for the working class, ethnic minorities and the elderly in care homes.  The death toll includes very few from the leafy suburbs and gated properties of the rich, while thousands who started out in poor health and poverty have paid the ultimate price.

There is little, if any, indication that the government cares about this.  The welfare of the poor has never been high on the agenda of any Tory government, even the most benign, and Johnson and his cronies will not be winning any accolades in that regard.  While not quite at the level of the systematic destruction of working class communities in the Thatcher years, Johnson is clearly more closely aligned with that brand of Conservatism than any so called One Nation approach.

Talk of ‘levelling up’ is purely that, talk to keep the newly elected Tories in Northern seats onside, in the hope that a few crumbs from the Westminster table will fall their way and they might scrape through into a second term in Parliament.   There is not, and never will be, any levelling up with the Tories for the simple reason that their whole raison d’etre is to ensure that the playing field is not level, that their class interests are defended and their privileges are protected.

None of this will every appear in any manifesto.  Just as their racist immigration policies, antipathy to local government and craven adherence to weapons of mass destruction over social investment and hospitals, will never appear in black and white in those terms.  Credit where it is due, the Tories have always been smarter than that.  Their core strategy of keeping enough of the people fooled, enough of the time, with a helping hand from a compliant BBC and right wing press has generally paid off.

Home ownership, share ownership, a stake in the country’s wealth, private health schemes, more private cars than ever, get rich, win the lottery; all holding out the hope to people of jam tomorrow. A flurry of Royal Family sagas and more war anniversaries and commemorations than anyone thought possible in recent years have also reinforced a national narrative that plays into the narrow jingoism of the Tory nationalists.

When did VJ Day ever merit two minutes silence?  Certainly, no discussions have featured the US war crimes in Hiroshima and Nagasaki, as part of the ending of the Second World War narrative, over the past weekend.

The government is now embroiled in a debacle over A level exam results, with what can only be seen as a class based algorithm handing out lower grades in underprivileged areas, while reinforcing top grades for the private school sector.   It is being presented as a problem with regulator Ofqual but is part of a wider picture of reinforcing the privilege of those who ‘expect’ university places, rather than those who deserve them on merit.

In a further move to reinforce its support base part of the function of Public Health England will be hived off to be merged with the NHS Test and Trace organisation, to be led by Tory peer Baroness Harding.  Test and trace is currently being run by private sector sharks Serco and Sitel, yet another example of profit from public health being put ahead of public health itself.  How much the private sector has made from government contracts throughout the pandemic will be a revealing calculation.

There is no levelling up, there is no people’s government, there is pocket lining and reinforcement of privilege.  The Tory leopard cannot and will not change its spots.  A less compliant Labour leadership would be landing blow after blow, exposing the scandal of the government’s handling of the entire pandemic, calling for investment in public health rather than shoring up opportunities for more private wealth.  The Opposition needs to find some bite to its strategy to oppose.