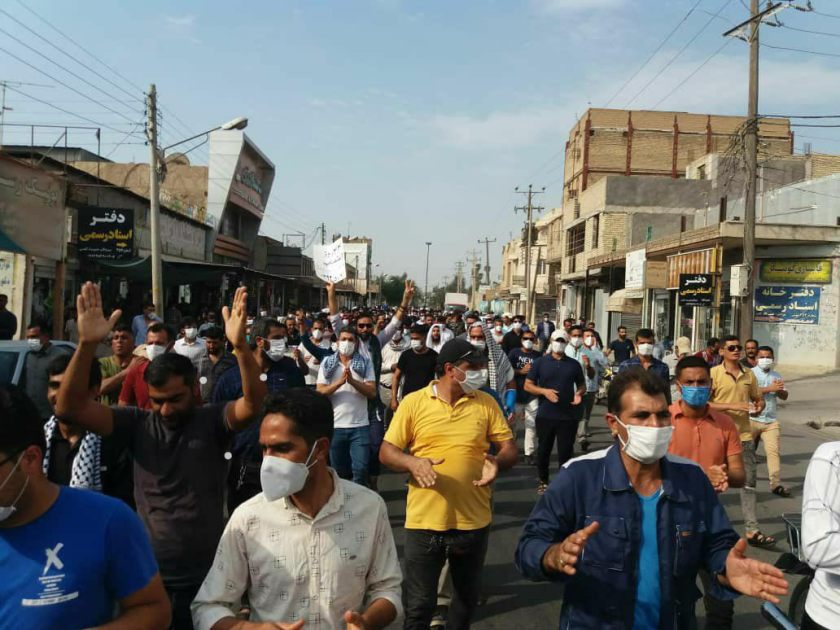 An unprecedented wave of strike action is underway in the gas and oil fields of Iran, as workers down tools over the late payment of wages, insecure employment contracts, poverty wages and intolerable working conditions.  Temperatures in Iran’s refineries can reach up to 50 degrees Celsius, a danger to health and almost impossible to work in.

An estimated 10,000 workers have been involved in wildcat strike action which has hit major refineries and industrial projects in Iran’s South Pars gas fields.  The strike has remained solid for over a week.  Localised protests have been common in recent years, as employers have squeezed pay and conditions in order to maximise profits, but the co-ordination of action, affecting a number of refineries and many contractors, is a new dimension.

By Saturday, 1st August, of the 10,000 workers on strike, 5,000 had abandoned the gas fields entirely and returned home.  Other remained in their dormitories, waiting for employers to give in to their demands.

Those on strike cover a range of trades including builders, electricians, welders and pipefitters, who work for employment agencies and gang masters on a variety of industrial projects in the world’s largest natural gas field. They work a shift cycle of 20 days on, ten days off, and are housed in dormitories close to the workplace while on shift.

The action has seen hundreds of workers protesting outside the offices of the contractors, declaring their intention to refuse to work for an entire 20-day shift cycle.

IndustriALL Global Union’s Iranian affiliate, the Union of Mechanics and Metalworkers of Iran (UMMI), has to operate under restrictive conditions in which independent trade unions in Iran are not officially recognised by the regime.  In spite of this UMMI is optimistic that, given the scale of the action, workers may have a chance to win concessions and possibly gain representation at major industrial sites.

The development of the South Pars fields is Iran’s flagship hydrocarbons project. The economy depends on the project for foreign exchange as it experiences hyperinflation. The significance of the fields is underlined by the fact that it is the state-run oil and gas company that has jurisdiction over all projects in South Pars.

Lost revenue therefore has a direct impact upon the beleaguered Iranian exchequer.  While this may augur well for a negotiated solution the Iranian regime is not noted for conceding to workers demands and a long struggle may yet be ahead. Organisers are already wary of retaliation by the security forces, a common tactic in Iran, as the strike spreads. There are already reports of arrests and surveillance against key activists.

French energy giant Total signed a deal to develop the fields in 2017, but pulled out due to US sanctions.  The fields are being developed in partnership with other multinational energy companies, but Iran has struggled to raise the necessary financial commitment. Contractors are under pressure to complete work on projects which are behind schedule, and often face liquidity problems due to delayed payments on government contracts due to banking sanctions.

International support will continue to be a crucial factor in sustaining the immediate action but also raising the profile of the struggle for wider trade union recognition in Iran.

Sources inside Iran have stressed the significance of the actions as this is the first time in the history of Iran’s labour strikes that contract workers in the country’s oil, gas and petrochemical industries have managed to organise strikes on such a scale.

Contract workers, make up about 70 percent of the total workforce in the sector, but are generally unable to organise such large-scale protests due to their dispersal across a range of companies and contractors.

The fears of the regime that the action could spread from economic to political demands were intensified recently when 14 independent organisations, from different social classes and spheres, issued a statement in support of oil, gas and petrochemical workers’ strike movement. “A general strike is the only way” is the final sentence of this statement.