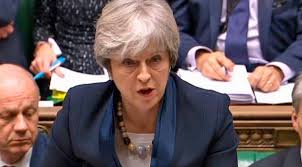 Washed up UK Premier, Theresa May

UK Prime Minister, Theresa May, has nowhere left to go.  Politically she is all washed up. On Tuesday night she suffered the biggest Parliamentary defeat of any Prime Minister in history, when her Brexit deal was lost by a margin of 230 votes.  A day later she won a vote of confidence in her government by a margin of 19 votes.  What do these seemingly contradictory votes tell us?

Essentially May is a hostage to the Democratic Unionist Party (DUP) thugs in Northern Ireland and the so called European Reform Group (ERG) in her own party, led by the Member for the eighteenth century, Jacob Rees-Mogg.  Both groups are dead against May’s Brexit deal, along with many other MPs, but could not bring themselves to vote down the government itself, as they have vested interests in preventing a General Election which could hand the keys of 10, Downing St to Jeremy Corbyn.

Both groups know that a Corbyn led government would re-open negotiations with the EU, something the EU would have to accept on the basis of the government having a new mandate, and seek to negotiate a Brexit in the interest of the people of the UK, not the banks, corporations and the City of London.

This is exactly why Labour leader Jeremy Corbyn rejected the offer of talks extended by Theresa May as a stunt.  May, having failed to negotiate a deal in the so called ‘national interest’ over a two year period, had the temerity to suggest that it was the duty of opposition leaders to meet with her to find a solution to the Brexit impasse.  Corbyn has made it clear that he will only meet if the prospect of a no-deal Brexit is off the table.  May will not make that promise for fear of alienating the DUP and ERG.

Ironically, those leaders from the Liberal Democrats, Green Party, Plaid Cymru and Scottish Nationalists, who have met with May, have demanded that taking no-deal off the table is a condition of any progress.  Only Corbyn was brave enough to make it a condition of talking to May in the first place, hence the usual vitriol from the right wing press about Corbyn not acting in the national interest.

The national interest for Corbyn is not the interests of the banks, corporations and City of London but the interests of ordinary people, for whom the EU has been a disaster for most of the 40 years of UK membership, and certainly over the past ten years of enforced austerity.

As ever though the Labour leader is having to walk a fine line.  There is a cohort within the Labour Party still believing that remain is the best solution and that the EU is the greatest political protection for peace and workers rights.  Others have threatened resignations if there is a second referendum. as they see that as a betrayal of the first vote and the expressed majority desire to leave the EU.

As Corbyn has consistently argued, the only real way out of the impasse is a General Election which gives a new government the mandate to negotiate with the EU.  In the short term that would require a suspension of Article 50 and an extension of any transition period before departure.  That election would need to be fought on the basis of Labour being clear that it will negotiate a Brexit deal; that the EU does not act, or allow a UK government to act, in the best interests of its people; and that the election itself would be a genuine people’s vote, as opposed to the spurious demand from some in the political centre.

In short it is not a campaign for a so called people’s vote that is required but a clear articulation of the need for a people’s departure from the EU.  Any other solution, usually characterised as bringing together a divided nation, is merely fudge.  The nation is divided over Brexit, the challenge is to takes sides and raise the standard for a people’s leave, that puts to bed the delusion that the EU is an expression of internationalism and defender of workers’ rights once and for all.