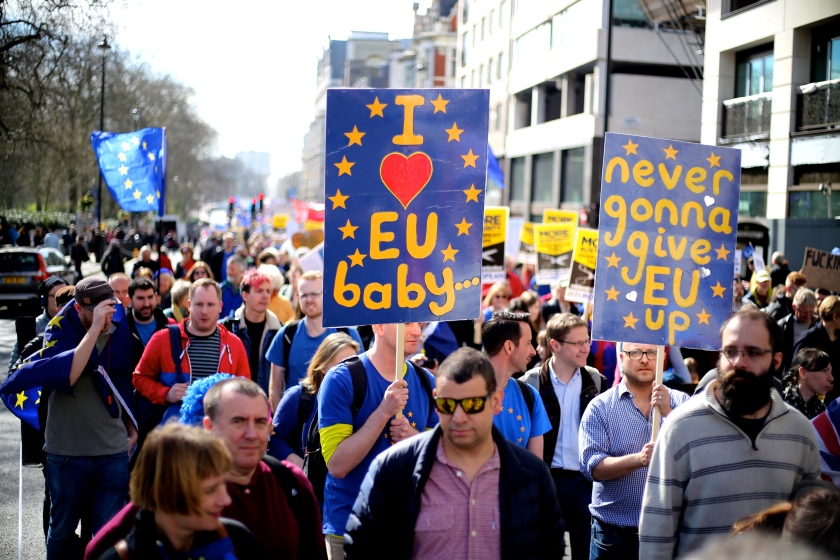 The British political establishment are increasingly mobilising for a second referendum in order to break what they describe as the impasse over Brexit.  General opinion appears to suggest that little public change has taken place since the 2016 referendum and the outcome could be exactly the same.  The real driver behind the second referendum call is not a desire for democracy, the cloak in which it is draped, but a desire to get a ‘remain’ outcome and thereby halt the UK’s departure from the European Union.

The craven pro EU Liberal Democrats back the second referendum, as do the Green Party, much of the liberal media and increasing sections of the anti-Corbyn Parliamentary Labour Party.   Tony Blair has periodically been wheeled out by the media to trumpet his call for a centrist alliance, possibly even a new centre party, anything to dilute the influence of a left leaning Labour Party under Jeremy Corbyn.

The problem for Corbyn over the coming weeks is that he will not be able to rely upon the support of his Parliamentary colleagues in his effort to expose the failure of the government and bring about a general election.  Theresa May, it is widely expected, will lose the Parliamentary vote on her Brexit deal on Tuesday.  It is now widely expected that Jeremy Corbyn will follow that defeat with a call for a vote of no confidence in the government, on the basis that the call being made any later would not allow for an election before the UK leaves the EU on 29th March 2019.

However, Corbyn will not win a vote of no confidence in the government because the DUP, unless things change in the next couple of days, will not back such a move, Tory MPs are equally unlikely to defect in favour of a general election, which could see them losing their seats, and the Parliamentary Labour Party is not a body of support which can be relied upon.

So, May loses the Brexit vote and Corbyn does not succeed in winning a vote of no confidence in the government; where to go?

The pressure for May to resign will increase from inside her own party, especially if she loses heavily.  However, trading one Tory for another is ultimately neither here nor there.  Apart from the hard core Little Englander right wing, of the Jacob Rees-Mogg variety, the Tories are predominantly pro-EU.  They can see the EU for what it is, the continuation of Thatcherism by other means, and they have been desperate since the outcome of the referendum to find a way back to a remain position and to revoke Article 50.

More serious than internal Tory strife will be the pressure from within Labour for Corbyn to back the call for a second referendum.  Angela Smith, Labour MP for Penistone and Stocksbridge for example has said,

“The time for prevarication is over.  If May’s deal fails we have to test the will of the House and if we fail, we must consider all options including campaigning for a second referendum as this is party policy.”

“A public vote would not only allow us to move beyond the current stalemate but would actually start the desperately needed process of healing the deep divisions that have opened up within our society.”

Khan has not been living in the real world if he really believes the ‘deep divisions’ within our society only emerged as a result of the referendum.  He is even further removed if he thinks the outcome of a second vote is a solution.  What if ‘leave’ wins again? What if there is a small margin in favour of ‘remain’?

Khan is keen to suggest that “the EU has been a force for good for generations – boosting our living standards, strengthening workers’ rights and acting as the greatest movement for peace and democracy the world has ever seen.” (The Observer 13th January 2019)

How far those on universal credit, or austerity driven zero hours contracts feel the boost in living standards, might be something for Khan to contemplate.  The same considerations apply to workers’ rights, which have been progressively eroded over the whole period of EU membership, with increasing constraints on trade union activity and membership.  As for peace and democracy, the migrant crisis is just one example of the EU siding with US policy in the Middle East, to support interventions which have resulted in the deaths and displacement of millions.

Given the current alignment of political forces, and the overwhelming desire of the UK political establishment, a second referendum may well be on the cards.  Just don’t expect it to provide any magic solutions.