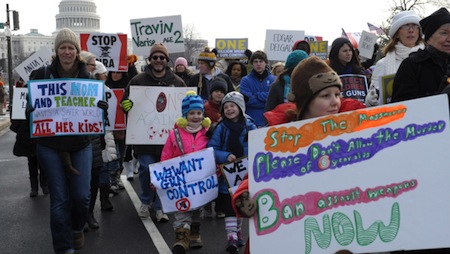 Protests against gun violence in the US continue

The endless slaughter of schoolchildren in the United States has seen 18 incidents so far this year, of which the killing of 17 students in Parkland, Florida this week was by far the worst.  In response the US President, Donald Trump, far from looking at ways to de-escalate the crisis, has suggested that the solution is to arm school teachers.

Adding more guns into a situation in which psychopaths can buy automatic weapons and then go on the rampage does not sound like a way to address this issue.  It is certainly not the way millions of US school children and students are telling the President that they want to proceed.  On the contrary, the de-escalation of gun ownership and access to weapons capable of mass killing is on the agenda in the US with a force not seen for decades.

The philosophy articulated by National Rifle Association (NRA) Vice-President Wayne LaPierre that “The only way to stop a bad guy with a gun is with a good guy with a gun,” sums up the delusional position of the American Right, sounding increasingly archaic and outdated as the death toll rises.

Arming teachers may satisfy the profits of the arms manufacturers and their NRA cronies.  It may add to the $30m the NRA spent backing the Trump presidential campaign.  There is no evidence to suggest that it will save the life of one student or school child.  Gun deaths claim an average of seven children a day in the US, as well as around 80 adults.

The anti-gun lobby in the US has raised the issue of the dangers of more widespread gun ownership.

“Over the past two or three years we’ve seen an explosion of legislative proposals to force schools to permit guns or to arm teachers,” said Adam Skaggs, chief counsel at the Giffords Law Center to Prevent Gun Violence. “And it’s not just pushing the idea that people need guns in schools to be safe, it’s the idea that people need guns everywhere – city streets, public parks, even government buildings.”

The lack of control and regulation of firearms means that young people can easily access guns indirectly through their parents.  As Skaggs went on to say,

“If we want to talk about preventing school shootings, we should be talking about stopping kids getting their hands on guns in the first place.  Those are the laws we should be looking at.”

The demand for stricter gun laws, in spite of NRA propaganda claims, is widespread in the US while the support for more rigorous background checks has majority support.  The gun lobby in the US however maintains a stranglehold on the legislature and Senators and Congressman, for fear of losing their seats, will not stand up to them.

Voting in the United States, purportedly the world’s greatest democracy, is notoriously low.  Elected representatives may think that the current balance of forces is unlikely to change and pandering to the NRA and gun activists is the best way to keep their seats.  They may be wrong.

The young people expressing their anger at the Florida killings are close to voting age.  Many of those affected by shootings will be eligible to vote by the time of the next presidential election in 2020 and some in Congressional mid term elections later this year.

The American Right hide behind the US Second Amendment in defending the “right to bear arms” but as the Communist Party of the USA point out,

“The Second Amendment was adopted to enable the new American republic, lacking a standing army or state national guards, to muster militia to put down domestic uprisings and repulse any attempted return by the British.

The Second Amendment is now being used by right-wing, anti-worker groups and politicians to divide and conquer, in the process threatening the basic safety and security of all Americans. There is no basis for claiming this amendment was intended to permit unregulated personal acquisition of firearms, including amassing military-style weapons and private arsenals for “protection,” including “protection from the government.””

It is poor, working class and families from Latino and African American backgrounds that are predominantly the victims of gun crime.  The class dimension to the issue is evident when any analysis of where the victims come from and where the arms profits go to is undertaken.

While the right wing in the US seek to cut medical aid, health care and social programmes they suggest that the issue of gun violence is about mental health, not access to weapons.  Their cynicism beggar’s belief.

As the CPUSA rightly conclude,

“The battle now being waged for real steps to end gun violence is a major political and ideological battle against the ultra-right. It is a battle against their backward “free market capitalism” ideology of a “you’re on your own” society.

The battle to curb gun violence is a working-class issue.”

For more info go to www.cpusa.org