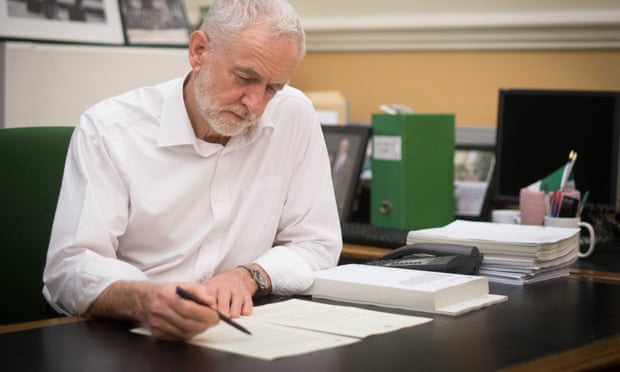 Corbyn outlines the way forward for Theresa May

The dead end option of a second Brexit referendum, beloved of the right wing in the Labour Party determined to oppose Jeremy Corbyn at all costs, slipped further from view this week.  The ostensibly unlikely cause of this retreat was correspondence from Labour Leader, Jeremy Corbyn, to UK Prime Minister, Theresa May, setting out the basis for a Brexit which would avoid the dreaded No Deal option.

Corbyn, reflecting Labour Conference policy, has been consistent in his position in advocating a UK wide Customs Union with the EU, taking out the backstop argument at a stroke, and close alignment with the Single Market, “underpinned by shared institutions and obligations, with clear arrangements for dispute resolution.”

Corbyn goes on to outline the need for dynamic alignment with rights and protections for UK workers; commitments to engagement in EU agencies relating to the environment, education and industrial regulation; and agreements on the detail of future security arrangements.

In spite of the insistence of the BBC and other sections of the media that Labour has no policy on Brexit, it is clear from Corbyn’s letter that Labour clearly has and, if in government, would be prepared to implement it.

The waters are muddied not just by the media however but by the right wing in both the Labour and Tory parties.   The European Reform Group (ERG) of Jacob Rees-Mogg et al, would happily leave the EU without a deal and go straight to World Trade Organisation (WTO) rules.  At this stage in the negotiations, with Parliament set against a No Deal option and business unprepared for anything more than a transition period, the ERG position is more out of touch than ever.

The ERG, in cahoots with the DUP, do command enough votes to torpedo any deal May puts to Parliament, unless she can win Labour support.  Corbyn’s programme offers that opportunity but May fears that the right wing in her party will split and the Tories fall apart.  The ERG so far have supported May in crucial votes, if only to keep a General Election at bay.

Labour progress is hampered by the antics of the so called People’s Vote group of MPs around Chuka Umunna, who insist that a second referendum is the only way forward.  The People’s Vote is essentially a Remain front organisation, convinced that a further vote would change the result of the 2016 referendum.  This is a huge gamble but the MPs associated with this group are equally concerned to discredit Jeremy Corbyn and his leadership, taking to social and any other form of media, as often as they can to do so.

The People’s Vote response to Corbyn’s letter has been described as apoplectic, a sign that they are being outmanoeuvred.  Other EU leaders have welcomed the approach outlined by Corbyn as a way forward.  There are rumours that a breakaway party of right wing Labour MPs could be formed as early as next week, a reflection of the tactics adopted by the Social Democrats (SDP) splitting from Labour in the 1980’s.

Any so called ‘centre’ party is likely to suffer the same political ignominy as the SDP but could still do untold political harm in the short term.  Ironically, although they may never admit it publicly, the Labour splitters share the same aim as the Tory ERG; keep Corbyn out of 10, Downing St.

Whether the backstabbers in Labour make their move, or dither hopelessly as the ERG did in its failed coup against Theresa May, remains to be seen.  What is clear however is that the only way out of the present impasse is not being offered by the right wing of Labour, or the right wing of the Tories.  It is not being offered by the Government.  The only credible way forward, currently on offer, is coming from the Leader of the Opposition.