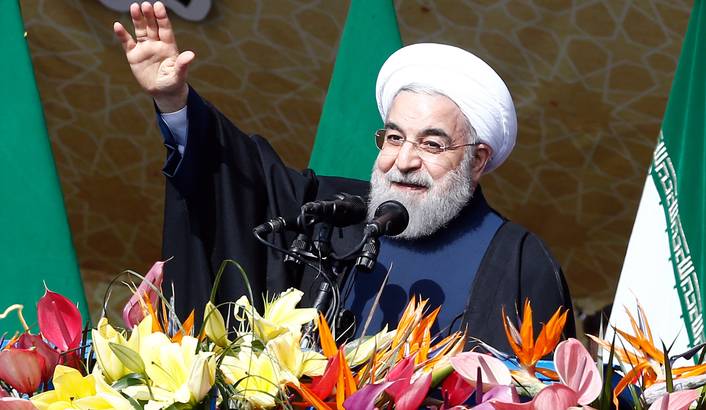 Heralded as a reformer by certain sections of the Western press, re-elected Iranian President, Hassan Rouhani (pictured), has spent four years in office without doing a thing to improve the human rights record of the Iranian regime.  Rouhani has done nothing to support the development of trade unions or advance the position of women in Iranian society.  His neo-liberal economic policies have seen inflation rampant while unemployment has soared.

In spite of this, following the outcome of the 19th May elections in Iran, Rouhani has secured a further four years in office.  He did not be stand on a platform of extending the misery of the Iranian people, though this is a likely outcome, but as the man who delivered an end to international sanctions through the 5+1 deal with the United States and European Union.  The deal, whereby international sanctions will be softened in exchange for Iran accepting strict controls on its nuclear energy programme, was barely bedded in when the US electorate returned Donald Trump as president.

Trump has been a vociferous opponent of the deal with Iran and, if his foreign policy concerns were not already overburdened, with airstrikes on Syria, bombing Afghanistan and the developing face off with North Korea, rewriting the terms of the deal may have been further up his agenda.  Which is not to say that Trump will not return to the subject of Iran, no doubt he will.  It is likely to form part of the discussions in his current visit to Saudi Arabia.  Rouhani’s second term may well be shaped by how he deals with the US president over the next four years.

The more conservative elements in the clergy fielded little known Ayotollah Ebrahim Raisi as their election candidate.  Regarded by many as a likely successor to Khamenei, but lacking political experience, the presidency was seen as a possible route to paving the way for Raisi to take over as Supreme Leader.  With Khamenei rumoured to be in the advanced stages of prostate cancer the need to locate a successor may come sooner than anticipated.

Raisi as a candidate was however problematic for the regime, bringing his own baggage.  Although little known as a politician, he does have a reputation as a ‘hanging judge’, particularly in relation to the massacre of thousands of the regime’s opponents in an especially brutal episode in 1988.  The commemoration of the executions, known as the national catastrophe, is a significant event, taking place each September in Iran, and Raisi’s role is well known.

Rouhani securing a second term is based on the fact that the Iranian leadership want to continue the normalisation of diplomatic relations and cooperation with the EU and US.  They want to see the sanctions lifted and thus remove an immediate existential threat to the survival of the regime.  A Rouhani administration is considered to be a grouping of mainly able technocrats, many educated in the UK and US, who are best placed to oversee this process of detente.  The attitude of the Trump administration remains a potential barrier to this strategy.

One certainty is that there is little hope in prospect for the Iranian people from the election outcome.  Negotiations with the government have been ongoing for some time in order to set a national minimum wage, based upon an agreed basket of goods and services.  Over the last year the cost of the basket of goods and services that could provide an acceptable living standard for workers has, according to the National Statistical Centre, risen from $863 to $924 monthly.

The government committee setting the minimum wage in March determined the rate for the current financial year at $287, based on the argument that the employers and the government were not prepared to accept an increase of more than 14.5% on the previous year’s figure.  The basis of the decision was the official inflation rate.  The employers have said that they will not consider a higher rate, in spite of the fact that the official rate of inflation is widely accepted as being well below the actual rate in the economy.  So, Iranian workers will be condemned to another year of poverty.

The regime has been trying to open the labour market to foreign capital.  They argue that the Iranian worker is educated, skilled and is cheapest in comparison with similar countries.  However, the labour law, one of the few legal protections for Iranian workers, is an obstacle to inward investment as far as the government is concerned.

Since his election to the presidency in June 2013 Hassan Rouhani’s government has attempted to persuade the parliament to change the law.  Trade unions and workers organisations organised a mass demonstration outside the parliament on 15th November as the law makers were due to start their work.  Under pressure the parliament sent back the proposed legislation to the government.  However, given the outcome of the presidential election, there can be little doubt that the government will once again try to reverse one of the few legal protections afforded to Iranian workers.

The rate of unemployment is a significant factor in generating discontent amongst the people of Iran and in particular the younger population.  While education outcomes remain generally positive in the country the likelihood of finding gainful employment is clearly diminishing.

International factors have no doubt played some part in determining the outcome of elections in Iran.  It may be however, that internal factors will yet play a significant role, as protests against the government become an increasing feature of Iranian politics following the election outcome.